I really enjoy watching improv. Our school has an improv group that performs twice a year. Every time I see games that might work in my classroom. Here are 2 examples of improv games that my students like. I have used these with 4th grade and up.

1) Choose a story/poem, or it could be a scene from a novel you are reading. It needs to be long enough to be interesting but short enough not to be overwhelming. Teach/Review it to your students by reading it together/asking PQA/ acting it out etc. For example,

2) This works really well if there are certain movements or sounds that follow certain parts. For example, in the story above you might add… 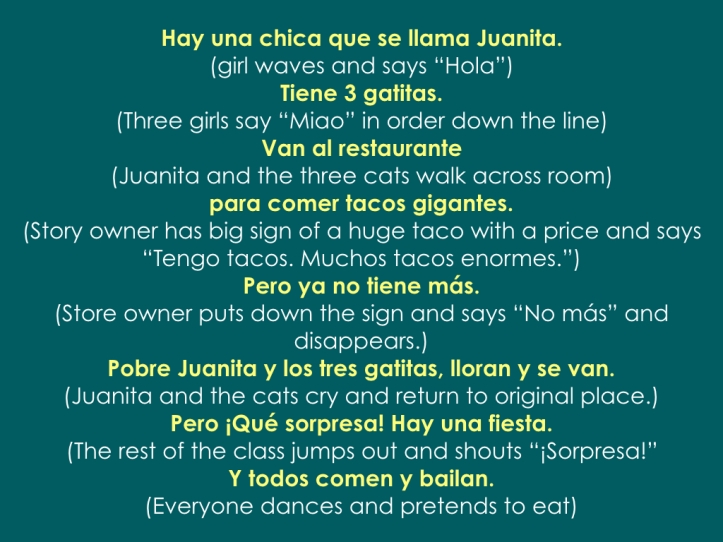 2) NOW FOR THE FUN! After students have a feel for the text have them tell the story again but this time have the actors replay the scene with different emotions, characters, roles.. Possible themes:

1) Divide your class into 3 groups.

GROUP #1 Individually, each student writes a sentence that has to be the beginning of a story (in the target language). “There is a chicken. His name is Hidalgo.” “There once was an ugly princess.” “Once upon a time in the land of toasters, there lived an old piece of toast.”

GROUP # 2 Each student writes a sentence that would fit in the middle of a story (in the target language).   “Then he sits down and cries for 3 years.” “Suddenly, she sees Justin Bieber.” “The dragon was so angry that he spit fire into the sky”

GROUP # 3 Each student writes a sentence would be at the end of a story (in the target language).  “The king never ate pizza again.” “She was very happy and danced home.” “And that’s how Stella got her groove back.”

You can do the next part together as a class or in small groups.

During step 3, students can have about 10 minutes to work together and write the story down on a piece of paper to present, or…in true improv form, they have to perform the story in front of the class on the spot (courageous and advanced language students only).

Keeping it comprehensible, compelling, and fun

English as a Second Language and Comprehension Based Teaching

A glimpse inside my journey of teaching Spanish

For those educators out there venturing into unexplored territory, trying new strategies and building on the ones that work. We are Adventurous Educators motivating Adventurous Learners!

a journey into the world of comprehensible input

En Français, SVP!
It's time to..GET YOUR LEARNING ON!

Let's find our way together through this crazy, beautiful profession of teaching, shall we?

Sharing ideas from one Spanish teacher to another.

Every day is a new adventure. Come along for the language learning ride!

My journey as I wander through the world of languages

My journey to become a better Spanish teacher

My generation of polyglots

One Year in Spanish

Ideas and Resources for Teaching Spanish and MFL from a Spanish Teacher using Mary Glasgow Magazines in her Classroom.

Michel Baker's Blog - TPRS™ and Beyond
Somewhere to Share